Today is Remember Me Thursday. A day for us to shine the light on the millions of perfectly wonderful fuzzies who lost their race against time, waiting in shelters around the world, just waiting for someone to love them forever. I am not surprised that many of the blogs I follow are writing about this today. There’s a reason we’re blog buddies! You won’t be surprised that I’m writing about it either. It’s something I’m passionate about. And if only one person who reads today’s post has a second thought about adopting a shelter pet, then I’ll be happy.

Let’s get a couple of things cleared up about choosing to adopt a shelter pet, rather than buying one from anywhere else {DOG forbid}! I know I’m preaching to the converted, but feel free to use these examples when encouraging others to adopt.

But I want a puppy. Oh, you mean a puppy like this? 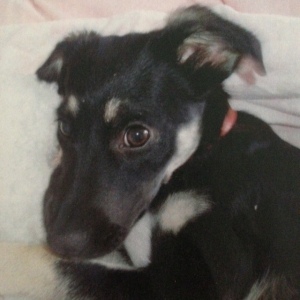 There are so many puppies in shelters. A ridiculous number of mumma puppies are surrendered while they are pregnant so litters of puppies are born in shelters across the world every day. Some, like my precious Bella, are abandoned by their previous people in such heartless manner {in a big box on the side of a busy road with three tiny puppies}. Thankfully Bella’s mumma and her brothers found their way to a rescue organisation. One of her brothers died, but the rest of her family found furever homes. You can read here what I have learned having had my precious rescue pup pal in my life for the past eight years. Here’s a fact you probably don’t want to read: not all puppies for sale in pet stores get sold. I walked past one just before I had Bubba and there was one puppy, slightly larger than the others and in his own little cabinet with a sale sign on him. When I asked why he was half price compared to the other little G , they told me it was because he was getting too old and was less likely to sell. He would have been lucky to be 9 weeks old!

There must be something wrong with them if they’re in a shelter. Wrong, wrong, wrong. Millions of the animals who end up in shelters started off as a cute little puppy or kitten in the pet store window, or in an online ad.

But they grew up. Their owners moved and they couldn’t take pets. Or their humans were going on holidays for a couple of weeks and don’t have anyone to look after our 11 year old dog – who we got as a puppy. Or their irresponsible owners didn’t spend time training them so they’ve got some issues. How about we just had a new baby so don’t really have time for Fido. And, no I’m not making any of these up – these are actual excuses cited by people surrendering their pets. Not a violent girl by nature, I don’t know how people in shelters stand listening to those inane, ridiculous, stupid excuses day after day. I think I’d probably punch someone in the nose.

Sadly, some anipals end up in shelters because their owners die or get really sick. My heart breaks even more for those guys, but I think it also raises a good question: if you have pets, have you made provision for them if something should happen to you? My Bella wouldn’t last in a shelter. She is a ‘senior’ dog {at a spritely 8.5} who has territorial issues with a very very small percentage of other canines. She would be deemed unfit for adoption and put to sleep. And everyone who has ever known her would shake their head in disbelief because she is the most loving, precious, kind, gentle dog you’d ever have the pleasure to meet. She still brings me her favourite toy every time I come through the front door – as she has every day for 8 years.

So if you’re thinking of adding to your family, I urge you to take a wander through your local shelter. If you want a specific breed, there are rescue organisations for almost every type of fuzz there is. Google them. Maybe you want to become a failed foster parent like I did with Beary. Maybe you’d like a dog, but you’re not overly enthusiastic about training a puppy, adopt a senior. You may get two or you may get 10 wonderful years together. In the end, you’ll be grateful for every. single. day. I know I am.

So today, be a #LightForPets. Use that tag in all of your social media to help raise awareness. There are lots of great profile and banner photos available for you to use here.

If you’re lucky enough to have your own fur family, give them extra loves today and tell them how much you appreciate them. And light a candle for all of those who weren’t so lucky.