Oh yeah there is such a thing. It’s surprisingly good, And it’s gluten free!

I’ve made it many times but this one was my best yet. Maybe it was the pizza pan I bought for $6 or maybe it was the wringing, squeezing and extra wringing. Whatever the reason, it was damned fine. Love Bug are every bite of her half, Bella and Beary were visibly upset. 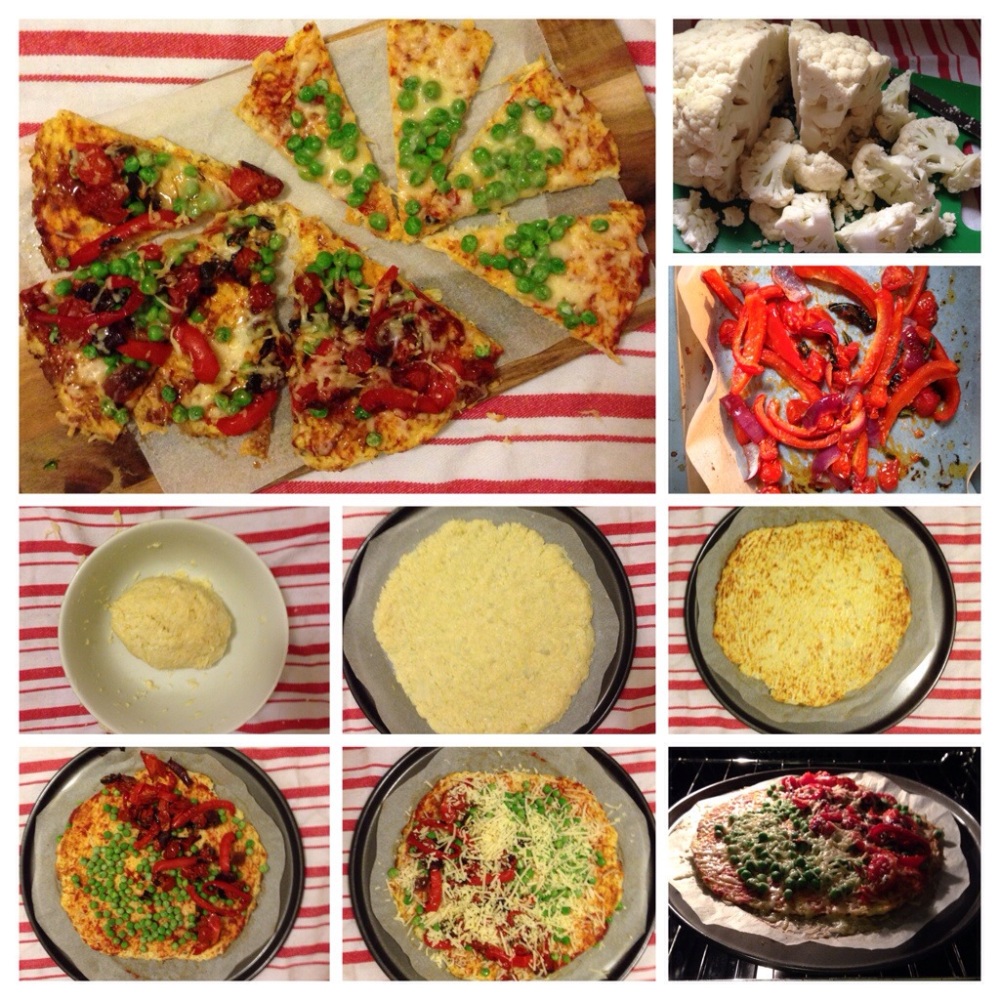 Toppings for your pizza are obviously a very personal choice. Love Bug’s half was peas {yes, at her request}. I had slow roasted a few baby Roma tomatoes, red capsicum, onion and sage in a little coconut oil – to add to my side with the peas.

Cauliflower crust
Cut a little more than half a large head of cauliflower into florets then blitz in food processor until it resembles rice. {Alternately you mash it after you’ve cooked it.} Steam cauliflower until it’s soft but not disintegrated. Tip it onto a tea towel, wrap it up and wring the liquid out. You want to wring out at least a cup of liquid, although I think my pizza crust was so good this time because I squeezed and squeezed – getting almost two cups of liquid out. As a little aside: maybe let the cauliflower cool a little before wringing it out. Because, well, OUCH if you don’t!

Transfer your cauliflower to a bowl, mix in one egg, half a cup of cheese of your choice, a sprinkle of your favourite stock powder or herbs/salt and pepper to taste. Roll your ‘dough’ into a ball and it should hold shape. If it doesn’t, give it another squeeze – a dryer dough will yield you a firmer crust.

Spread it on baking paper on a pizza tray {or biscuit tray} and bake at 180*C for 14-16 minutes. Take it out of the oven and let it cool for a few minutes before carefully flipping it over. Not everyone flips it, but I like mine to be browned on both sides.

Now you’re ready for your topping and you can add anything you’d add to a regular pizza. We had an organic tomato paste and peas then I added the extras to my half. Top with one third of a cup of cheese and pop your pizza back in the oven for 8-10 minutes … until your cheese is as melty as you like it. I drizzled a little caramelised balsamic over mine then we dug in.

The dogs were drooling but got this bad news: you can’t have any of my delicious pizza, okay Bella and Beary?

Somehow I don’t think they thought that was okay!