I thought I’d better get my 4 paws’ worth in before the end of the year.

Mumma is busy working this afternoon, so we kids are trying to occupy ourselves. Bubba keeps crawling over to where mumma is at her desk and pulling on her leg and blowing raspberries. They both giggle when this happens. I bet if Bella or I did that mumma would say she’s trying to work and we can play later. That Bubba really does get away with everything, maybe because she’s such a cutie?!

I turned 3 at the start of this month. 1 December to be precise. That’s 21 in human years, but I still act like a puppy. It’s not really middle child syndrome like mumma calls it. I just like to goof around and be silly. It’s more fun than trying to be serious all the time and, let’s face it, being serious is not really in a puppy’s DNA is it?

I came to live here with mumma and Bella two and a half years ago. Mumma was looking on rescue sites and other places helping a friend of hers look for a puppy to rescue. I think she may have said “oh no” out loud as soon as she saw my photo. Oh no because she wasn’t really looking for another fur-ever friend, and oh no because she fell in love with me instantly. She says it’s because I looked like a fluffier version of Bella – and look how well that turned out!

She had been thinking for a little while that she should get Bella a friend to play with (other than the doggies she goes on walks with during the day while mumma is at work), but in her mind that was probably an older rescue doggie, not a puppy … and if I know her as well as I think I do, probably a Border Collie!

Anyway, as much as her love for me was instant, she had Bella and we would have to meet. Mumma’s not too sure where I started life, but my lovely original family (who I’m still facebook friends with!!) got me from a pet store – which mumma shudders every time she thinks about – had to go back to live in England urgently so my sister (a very nice cat named Wolfie) and I needed new homes.

Wolfie found a home quite easily, but no-one seemed to want a beautiful looking (if I do say so myself – but you can say so too, just look at this photo) 6 month old Alaskan Malamute x Golden Retriever.

Mumma came to spend time with me a few times before she finally caved in and decided I could live at her house. The first time she came on her own and we went for a walk and then in the car on an adventure to see another lovely lady (who would soon become my grandma)!

The second time she and Bella met me in the park. Bella and I loved it and ran around like crazy kids. Then Bella came to my house to visit and the last visit was me coming to visit mumma and Bella at their home. That was loads of fun too.

So it was decided that mumma would be my foster mumma until I found my fur-ever family. That was two and a half years ago. I think she knew that she was always going to be my fur-ever mumma, but just in case Bella didn’t want a silly little brother, she probably had to say that!

We’ve had some adventures. I’ve been into hospital twice for emergencies. The first time I ate a whole container of spirulina tablets (pure protein!) and the container they came in. My poor Aunty had just moved home from America and had jet lag and woke up to me with a green face. She didn’t call mumma until after the vet had ‘evacuated’ my tummy – so she knew she was calling with good news. I had to lay on the couch and read Harry Potter for a couple of days until I felt better. 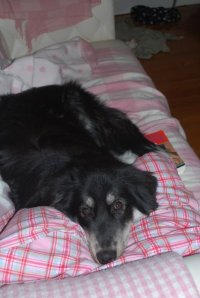 The second time mumma had a gift from someone and the smell was just too much. When mumma came home she asked me why I was acting more crazy than usual. Then she noticed that the bag with the gift in it had moved along the bench. Then when she walked past my bed she noticed a little bit of cardboard. It was the cardboard from around that really yummy dark swiss chocolate.

That I ate the whole block of.

That wasn’t a very fun night for mumma – especially around 3am when the vet told her that I wasn’t responding as well as they’d hoped. Poor mumma.

But I’m here still. And I’m super healthy. And very happy. I have a lovely family and I am a very lucky dog. I wish all dogs who needed to find fur-ever homes could find one as lovely as mine. And have a beautiful big sister like Bella. 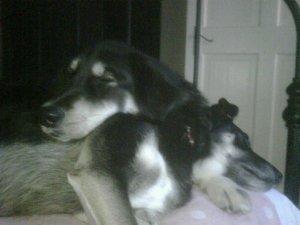 This is a photo of our little family hanging out on the couch last New Year’s Eve. Bubba was the Bump back then, but she went from Bump to Bubba 2 weeks later!