Bubba, who is still unwell, woke up feeling very sad around 1am. As I reached down to give her a cuddle, she wrapped herself around me and was not going to let go.

Into mumma’s bed we went, wrapped together, displacing Bella and Beary ever so slightly as we settled in.

We slept {a term I’m using very loosely, particularly at the mumma end of the equation} cuddled up together until morning. At one point Bubba’s foot was so firmly wedged under my rib cage it reminded me of being pregnant!

I am now more exhausted than I was before I went to bed last night, which I would not have thought possible. I have a very lethargic bundle of love on my lap and it’s taken her 45 minutes to nibble through three quarters of a piece of toast and half a cup of water. House hunting might be a little tricky today?!

The upside to being awake most of the night? Watching Bubba and Beary rearrange themselves – no matter where I moved them to – so that they were pressed up against each other. Her face partially buried in his soft fur and he sleeping with one eye open, keeping close watch over his precious Bubba. 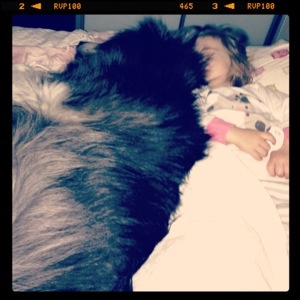