Love Bug is being a really tricky. A screaming, whingeing body throw down, tantrum throwing, thrashing, toy throwing meanie. And it is no fun at all.

I don’t cope very well with things I can’t control. I mean, I’m SO much better than I was before I had Bubba, but I’m still not all the way there. Or even half way really.

So standing beside a small person who is thrashing about on the floor screaming mumma at the top of her lungs in the middle of the shopping mall isn’t high on my list of places I really want to be. Particularly when I reach down to pick her up and all she can do is kick and hit out and yell no!!

Ending up in a Mexican stand-off over changing a nappy before or after breakfast on a kindy morning when I have a work meeting at 8am and she has breakfast when she gets to kindy? Also not so high on the list.

Or is making something for dinner {pink spaghetti with pink sauce … you’d be amazed how many vegetables I can puree into a pink sauce, and 2 drops of food colouring in the water will turn your spaghetti pink} only to have it picked at and told I don’t like it and I want yoghurt.

Or an epic battle to get into bed. From my child who has always been so good at her bedtime routine. Or the vociferous swing from angel to not to so much in the blink of an eye, for reason unknown. Or any number of other little issues I won’t bore you with.

The trouble is, they don’t seem like little issues at the time. They seem monstrous. And they are wearing me down. My nerves are frayed and my fuse is shorter. I don’t want to be that mumma: the screaming banshee woman, but some of this past week’s moments would test a saint. And a saint I ain’t!

I’m on Struggle Street. It’s been a tough few days at the mumma office. 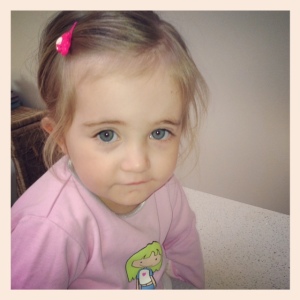