There are plenty of people who wish for a boy or girl when they are having a bubba, whether they vocalise that or not. Every bubba is a precious and amazing gift. From the time I was a little girl I always thought I’d grow up to have three little girls. I grew up and I have one, for this I know what an insanely lucky mumma I am. If Bubba had been a boy? I would have been just as insanely lucky, and as wildly in love {although I may have had to sell the stash of pink things!}.

Being exhaust-piped is not something I have ever claimed for myself. Every parent: single, partnered, working or stay-at-home will be exhausted at some point. Probably from about the time bubba is born until they move out of home!

I am far from a heroine. I am just a girl who dreamed of being a mumma and followed that dream. Nor have I ever claimed to be perfect. There is no such thing.

In the 778 posts I’ve put on this blog up until yesterday, I have only deleted one nasty comment. That one I had initially approved {everyone’s entitled to their opinion right?} and I then deleted the comment after I took the conversation offline with the person who wrote it. Because bumpyroadtobubba is my journey and my experience of motherhood.

But … I won’t be bullied. Nor will I have anyone who comments on my blog be bullied. There is enough negativity in this world, I don’t want Love Bug {when she’s finally old enough to read her story here} to feel any more than the world will already throw at her. I will do everything in my power as her mumma to protect her from negative comments about how she came to be.

Because she comes from a place of love, and she lives in a home filled with love, fun, wonder, friendship, fuzzy siblings, happiness, respect, acceptance and positivity. She lives in a home where we will grow together, make mistakes, say sorry, learn from them and continue moving forward.

And we’re going to remember what Thumper’s daddy told him. 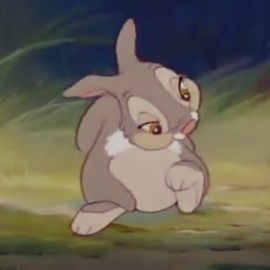 If you can’t say something nice … don’t say nothin’ at all!

Bubba is treasured and she is the best thing to ever happen in my life.

And after all, that is what this blog is all about.