Mumma is a film lover. I love escaping to the cinema and getting lost in another world for a couple of hours. I used to work for a film company and see at least one film each week. Oh how I miss those days!

We awoke on day one of our staycation to cloudy skies and much cooler weather than expected I figured today was as good a day as any to see how Love Bug would go in a cinema. If she lasted 10 minutes, an hour or the full film, it wouldn’t matter.

So off we went to see Planes. 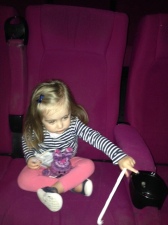 The cinema was relatively empty for a school holiday morning session, so we had the second back row all to ourselves. We raised the arm rest between our seats so Bubba could snuggle in, but for the first 15 minutes or so she sat statue still, mesmerised by the sheer size of the screen and all that was going on in this big dark room. 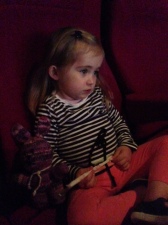 She then spent about 45 minutes watching the movie from the comfort of my lap before she sat in her own seat again for a little while. The last 15 or 20 minutes were spent wandering up and down the seats on our row, still watching the film, but a little restless. Lucky the session had so few patrons. I’m amazed she lasted so long being still. 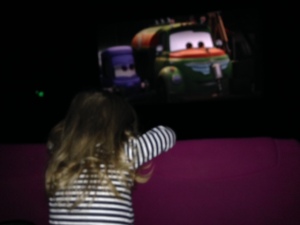 When the house lights came up, she looked up at me movies are fun mumma! Yay, hopefully the beginning of a life long love of films. Just like her mumma.