I came into this motherhood journey with my eyes wide open. Single mother by choice, and not a choice I made lightly. Not for one moment did I think it was going to be easy. Not one.

I’m sharing this because I think it’s really important to acknowledge that parenting is frigging hard work. And some days it makes you think you are going to lose your mind. What little there is left of it.

By sharing with you some snippets of my life this week, if you’re a parent you maybe won’t feel so bad next time you do something that you think might not get you onto the Parent of the Year short-list. I’ve definitely done my dash for this year.

I took Bubba to our doctor – for the fourth time in seven days – because she had coughed a hacking cough for about 12 hours straight. And cried. And screamed. And wanted to be picked up but as soon as she was, she wanted to be put down. And was thirsty, but wouldn’t drink, but wouldn’t let me take the sippy cup or bottle, instead taking it off me with a strength I didn’t know she had and flinging it across the room.

She was exhausted, but screamed when I put her to bed. She fought me getting into the car to go to the doctor. She screamed the whole way there. A four minute drive feels like an eternity with a screaming toddler in the car. Trust me.

That is until I had parked in the car park in the surgery car park and lifted her out of her car seat. Then she stopped coughing. She stopped screaming. She stopped crying, and she looked at me for the first time in 12 hours like she actually loved me. She was cute in the doctor’s surgery waiting room. She actually smiled at our doctor when he came out to get us.

We followed him into his room, sat down and that was the end of mumma.

Exhaustion aside. Sleeping in no longer than increments of 2 or so hours at a time for a week aside. The fact that Bubba is sick aside. This isn’t about her, it’s about me – mumma.

I cried for a solid five minutes. The kind of tears which just run in waves down your face and there is absolutely nothing you can do to stop them. Mumma wasn’t at the end of her tether, she had slipped off the end.

While I cried my silent tears, our lovely doctor checked Bubba’s ears, chest, breathing and throat. He told me that he thought she would be fine, that her fever is the key to whether we are on the home straight, or she is about to go downhill again, so fever is the thing I’ll watch.

Then he asked me how long I’d been feeling like I did in that moment. Exhaustion aside, probably since a couple of weeks before Bubba got sick. Overwhelmed. Although overwhelmed sounds like an understatement – stressed, tired and completely and utterly emotionally, physically and financially overwhelmed.

So, apparently, this is what post-natal depression feels like. Except that she’s nearly 16 months old, surely that would have happened sooner?

Has it happened now because I’ve finally weaned her and feel so completely disconnected from her? Apparently when women stop breastfeeding it is very common that PND kicks in. Why don’t people talk about this more?

Maybe my total melt down and loss of the ability to continue to be a fully function grown up is also because {apparently} I’m not a super hero – or a character in some movie? In the real world I am a single mumma who works full-time and has little support. I am not down playing the support I do get, because I appreciate it more than anyone could know. Nor am I trying to make anyone feel bad. I’m just telling it how it is. And I know I chose to do this on my own. But it’s tough.

I updated my Facebook status at some point during the week that I was thinking about running away from home. As I typed it, I knew I was joking. But I understood this week how to some people, running away becomes more than a joke. If they feel like there is no other option, they can’t see past the moment they are in, they turn their back and leave.

Luckily for me, and my little family, I recognise what I’m feeling is just a moment in time, it’s not all the time. So I filled the prescription that the doctor gave me, and took one of the tablets that might help me cope a little better.

It’s not a long-term solution, but just to get me out of this slump I’m in right now. And that’s okay. If I cut my finger and needed a bandage, I wouldn’t hesitate for a second. So my emotional state needs a bandage for a little while until it can breathe again. And that’s okay, because the alternative is not worth thinking about.

I don’t really know why I thought taking a little pill three times a day would make everything instantly better. I suppose I knew it wouldn’t, but just that it should make it a little easier.

And it will in time, but that night, after I put Bubba to bed – for about the fifth time, after a solid hour of screaming and thrashing around – I threw her sippy cup across the kitchen in utter frustration. Which, of course, was such a great idea because the top came off it and water went everywhere. That I then had to clean up, because let’s face it, there’s no-one else to do it. Thankfully it was only water.

Then I went and closed my bedroom door, turned off the baby monitor and curled up in the fetal position on my bed in between Bella and Bear. I pulled them close and pressed their fuzzy little paws to my ears to muffle Bubba’s crying. I could still hear it, albeit a little fuzzy.

I honestly think having dogs (pets in general I suppose, but for me, dogs) helps when you’re feeling fragile. Sure there may be two more mouths to feed, insurance to pay for, vets to pay for and messes to clean up, but where else do you get that unconditional love – knowing they are with you, on your side, and ready for a cuddle when you are in your darkest hour?

Of course, I went to her again. And again. She’d scream and scream then when I’d try to comfort her she’d scream some more. She’s sick I know, so I feel sad for her. It must be as frustrating for her as it is for me to be still dealing with this after seven days. Tiredness finally claimed her about an hour after I tried to put her to bed for the first time.

She slept for a few hours then we went through this again. And again around 4am.

My heart breaks for her. 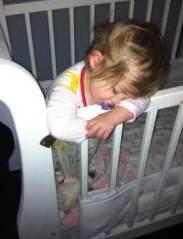 But at the moment my heart breaks a little more for me. I feel guilty. I feel like a bad mumma. And I feel like I can’t cope.

Being a girl who usually sees the glass as half full, and looks for the good in every thing and every day, these are none of the things I wanted to feel. Ever.

I love my Bubba more than life itself.

I just don’t love these days.